Limited-time offer! Sign up for the Stepping Up Without Stepping Out Webinar Today FOR FREE! 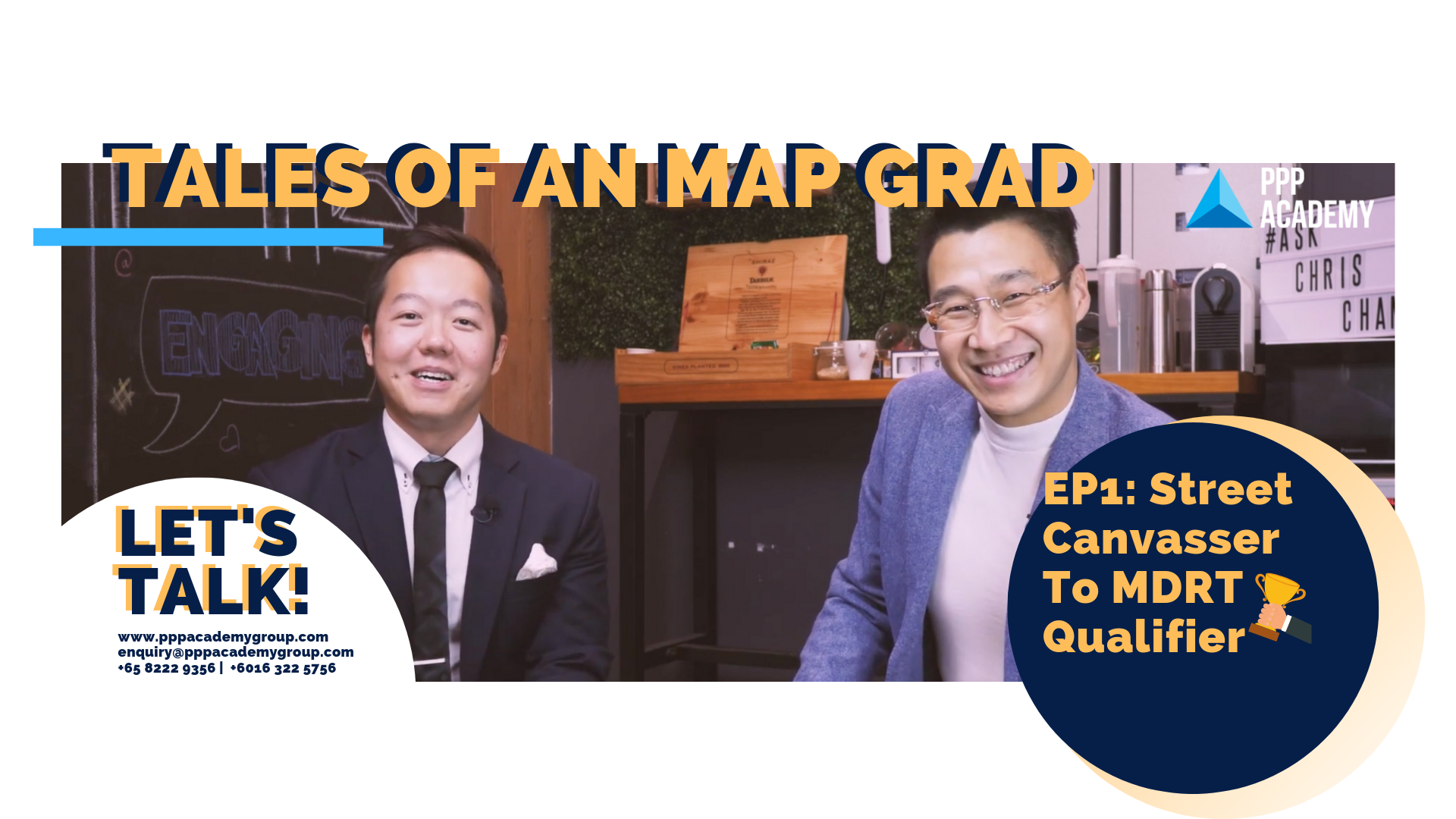 Referral-asking is one of the most crucial prospecting strategies that all sales professionals should harness. Furthermore, having a steady stream of highly qualified leads keeps us sustainable in the business. While a lot of us in the trade are well aware of that, we still do not practise it actively. Ultimately, it boils down to this self-limiting belief of ours of not doing enough to deserve referrals.

Likewise, one of our graduates – Bryce Chan – faced this initial prospecting problem that was hindering his potential in the industry.

Where was Bryce before?

As an NUS graduate, Bryce joined banking because he knew it was every student’s dream to own a title in the prestigious industry. After 4 years in backend banking, he dropped out of the glamorous corporate life and delved into self-employment.

What made Bryce take the plunge?

With a comfortable and well-paying position, what then led Bryce to take the leap of faith into financial planning? The stakes were undeniably high! Yet, Bryce believed that transitioning into self-employment earlier would allow him to increase his net-worth faster. We couldn’t agree more! In fact, self-employed individuals can earn as much as a typical corporate guy would in 20 years.

Let’s hear more about the issues Bryce faced before he enrolled in MAP (Millionaire Advisor Programme) back in January 2018.

Prospecting Issue #1: Unable to generate a consistent stream of leads

When Bryce first started in 2016, he was not generating a steady stream of leads to fulfil that ’10-15 appointments a week’ goal. In addition, he decided to venture into the cold-market first before stepping into the natural market. Although the latter market is known to offer more desirable results, Bryce still wanted to conquer the former first.

In the initial 2 years in business, Bryce was continually street-canvassing at MRT stations. From conducting surveys to facing rejections, he has been there and done that. Furthermore, Bryce was not exposed or trained in the easier and more inexpensive prospecting method, which is the referral-based practice.

In a nutshell, Bryce was not well-equipped with the right skillsets in prospecting mastery. However, he took the leap of faith and enrolled in Chris Chan’s MAP (Millionaire Advisor Programme) in January 2018. Let’s take a look at his transformation points afterwards!

Enrolling into MAP helped Bryce’s identify (and ultimately, enjoy!) the true benefits of the referral-asking method. On top of it being a time-and-cost saving prospecting method, it is also highly sustainable. His success in clinching MDRT within such a short timeframe is highly attributed to the adoption of the referral-based practice in his business! Well done, Bryce!

“The MAP Programme has tweaked my mind, in knowing that the referral-asking business saves time because the moment you sit down with the referred person, the agenda is already set.”  – Bryce

Similar to your elevator pitch, the Passion Pitch is a ready-made sales structure and technique that Chris coached Bryce in developing. What’s more exciting is that he was able to make use of the techniques learnt in MAP to connect with his clients of different backgrounds. In essence, you can even use the Passion Pitch to pique interest, drive desire and even spur urgency!

“Even if you were to ask me this Passion Pitch a week from now, a month from now, a year from now, I can tell you exactly the same thing.”  – Bryce

Apart from being featured on paper, venturing into seminar-selling in investment strategies was another of Bryce’s highlight. Seminar-selling is a powerful way to engage those who shared similar concerns and needed an eye-opener from an industry expert. In fact, Bryce enjoys being able to identify investment pitfalls faced by the audience and advising them on how they can improve.

His rising successes in seminar-selling is also credited to building his brand positioning which he does so on Synchestra – a branding and positioning tool for sales professionals. By taking your personal branding online, you’re already differentiating yourself from typical salesmen. In turn, potential clients are going to feel much more comfortable reaching out to you as an industry expert.

DISCIPLINE. Bryce’s humble disposition allows him to leverage on his internal drive and engine to motivate him to be a better version of himself in the business.

“Once you achieve that spark – whether is it achieving your MDRT, going to the papers or getting more clients, I think it’s more important to sustain…rather than just achieve and breaking the momentum afterwards.  – Bryce

Moving forward, Bryce is also rapidly building his advisory team! He is looking to mentor like-minded individuals who are actively in search for avenues to make a difference for themselves. (Of course, only for those who would value a high-impact career on top of just high financial independence!)

So, what is your key motivation and drive in the works you’re undertaking right now?

Look out for our next case study so you’ll always be in the know of present-day strategies in financial advisory!

Alternatively, contact our growth consultants to find out more about our upcoming masterclasses and programmes. We are committed to creating real change in the community in our in-class sessions, and hope to see you and your teams’ breakthroughs!

Taking your first step towards creating your own business breakthrough!